Let me start by saying, I don’t think that my way of teaching is the best, nor do I expect that every one ought to be teaching the way that I do. I think each teacher has their own style and way of engaging with their students.

I found myself creating the four or five slides that I was planning to use in my next lesson about five minutes before my lesson was due to start. It was last minute, yes. Disorganised, I don’t think so.

I had just gotten into work that morning and checked a quiz that my class had done online the night before. It was then when I decided to ditch my preplanned lesson and construct a new one. The reason for this change was this:

This gave me two things. Firstly, motivation to address a misconception. Secondly, a hook for my students.

Yes, it doesn’t look like the most engaging image and no it’s not a 3-act video lesson – I get it. It’s not bells and whistles, but it is relevant. It’s relevant because 50% of the class chose the same incorrect answer. An answer that they didn’t even realise appeared twice (both A and B equal the same thing but look slightly different). This was particularly important because this question appeared in what was intended to be a revision quiz. A revision quiz that, despite my best laid plans, still demonstrated a gap in the students’ understanding. It was this gap that caught the attention of my students and developed the need to learn the correct method.

I ended up completely changing my entire lesson. Here’s what I did:

I showed my students the question that most people got wrong in the quiz and asked, “what mistake would you need to make to get an incorrect answer?”

Initially my students didn’t understand how you could actually get the correct answer of 2x^6. Soon enough, however, the noise level picked up in the room and my students began arguing. The best part of this process was that the students were addressing the misconception themselves. Some students didn’t even pick up that A and B we’re both equal to 2, which was also picked up through this.

I then showed them the following operation to reinforce the learning from the misconception and also link to the next topic, Surds:

I told my students that, yes you could use a calculator to find the answer, however, solving it without one is possible. This linked in well with surds because of the focus on multiple representations and square numbers. In this problem, once 16 is simplified to 2^4 and 9 to 3^2, it can be simplified to 1/(2^3*3^3) or 1/(8*27), which is equal to 1/216.

Again, not anything flashy, but relevant and very intentional.

Part 2: Build a strong bridge to connect the understanding

The focus of the next part of the lesson was to emphasise the importance of simplifying terms to their simplest form: 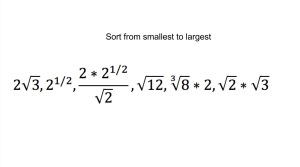 Each part of this problem was a slightly different learning experience for the students. This took about a minute to whip up and about thirty minutes for my students to work through. I don’t normally say this, but if you’re teaching surds, give them this problem.

Area and perimeter. I don’t even know when this is normally taught in schools because every student I ask, seems to know this without thinking too much. So instead I asked them this:

“It’s a rectangle!” One student yelled out.

“Are you 100% certain? Can you prove it’s a rectangle? If so, is it drawn accurately?” I replied.

The rectangle was drawn accurately and it was in fact a rectangle. But there’s something about asking students questions that causes doubt to set in. The proof that it was a rectangle and that the measurements were correctly placed required students to compare the two surds, just like the previous problem.

Next, they told me that they could probably find the perimeter and area. So they tried and failed. They tried again me learnt how to correctly add and multiply surds.

I’d say that my learning outcomes were pretty well met, even if it took me five minutes to whip up just before the lesson started.